It was a roaring weekend in Mesquite 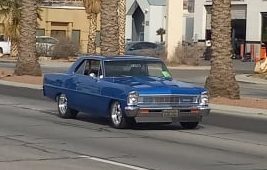 Motors were running and people headed out on the highways from all over the Western United States; destination Mesquite.

Car enthusiasts showed up this weekend because they love cars and because organizers keep bringing a bigger and better “Mesquite Motor Mania” each year. Guests also enjoyed slow drag competitions, roaring engines, burnouts, music and food. The event was organized by Las Vegas Crusin’ Association and sponsored by Mesquite Gaming.

When you talk to car people, many of the answers to the question, “What got you interested in cars?” begin with the phrase, “Well, because…” and the rest of the story is every bit as unique and diverse as the many autos you’ll find at Motor Mania; this year there were too many to count but each year there is an estimated 800-900 classic vehicles cruising Mesquite Blvd. like it was the Las Vegas Strip.

“Mesquite Motor Mania is set to prove once again that car lovers and family entertainment seekers have a wonderful event to experience every year in Mesquite, Nevada,” said Christian Adderson, assistant general manager for Mesquite Gaming. “It’s always fun to see these beautiful cars and incredible people converge in our city to turn back the clock and enjoy some of the coolest cars of all time.”

Mesquite Motor Mania is always free and open to the public. The event gave away more than $15,000 in cash and prizes for the car show participants.

Mesquite Police Volunteers and C.E.R.T. members directed traffic and attended to the safety needs of the crowd as they do for all major and some minor events. What would the community do without their hard work and dedication? It was only because of people needing to cross Mesquite Blvd. safely that traffic was held up at the site of the event. Most residents were aware of the event and took an alternate route around the Blvd. so volunteers could keep things moving safely.

Keep your eyes to the skies in two weeks: “The blue skies of Mesquite will be decorated by dozens of colorful hot air balloons as the Annual Mesquite Balloon Festival returns, Friday, Jan. 28 through Sunday, Jan. 30. The three-day event draws people from all over the country to launch their balloons over the beautiful desert scenery of Mesquite.”