The sort of stories that should be told 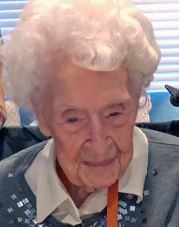 Yesterday, Jan. 21, NBC News reported what should have been a huge story but we didn’t hear it everywhere as we should have.

Thelma Sutcliffe passed away peacefully, having been under hospice care. She died of natural causes. A friend said, “It was just time.”

Thelma passed away and left the Brighton Gardens of Omaha Senior Living Center in Omaha, NE with one less resident.

On Oct. 1 this year the staff at Brighton Gardens will not be celebrating Thelma’s 116th birthday.

Thelma’s death should have been more heard about; she was the oldest living person in the United States as of Apr. 17, 2021. Thelma was 116 years 108 days old at the time of her death. R.I.P. Thelma.

Thelma remarkably overcame cancer twice in her long lifetime. Staff commented that she never seemed worried about anything and always kept a positive attitude.

Perhaps those are the secrets to long lives.

Doc Vern always says, “Stress is an antagonist!” It releases adrenaline and while adrenaline is a good thing when needed, it’s not a good thing all the time. Most of us live in a constant state of mental, emotional, social or job-related ‘pressure’ and it will wreck us physically. It seems that more and more we are in a constant state of fight or flight. Doc Vern just overcame, quite miraculously, a stroke. He’s a strong man who believes in natural practices and he’s 88.

I don’t know what Thelma’s life was like in her much younger years but I can imagine.

I lived in Plattsmouth, NE in my third-grade year. My uncle Ray was stationed at Offutt Air Force Base and lived in Bellevue. My mom had just gotten divorced and big brother came to the rescue but Bellevue was not to my mom’s liking very long. We only lived there a year before we moved back to my home state of Ohio.

I remember two major things about Plattsmouth, cows and corn. The town was one street, less than a dozen buildings and only one building was more than a single story. Anywhere other than that street it was cows and corn forever. Our school was a five-room schoolhouse and served K-4th grades. Everyone older had to be bussed to another town for school; my brother and I were in 3rd and 4th grade. My brother’s 4th-grade teacher was also the principal. Life was very simple and very stress-free. There is always something to do in the country but you never have to rush doing it, unless a storm was coming.

My mom was obviously addicted to the rush of city life. She was young and not much for the very secluded and limited country lifestyle. Back to the suburbs of Cleveland, we went where life moved much faster and opportunities were much greater. As a child I was just thrilled to be moving back to Grandma; I missed her and my cousins terribly but the country life of Nebraska was where my heart would always stay. Summers in my family’s farm in Fayetteville, Ohio was always something to look forward to; life was so full yet so simple.

I can imagine Thelma living there for 115 years. Life wasn’t easy, working a farm is physically challenging but exactly what we were made for. Life 115 years ago didn’t have mechanical or technological advancements that we have today. Concrete and steel hadn’t yet replaced what God and nature had given us to live on. Nothing was “Genetically Modified.”

What was Thelma’s secret to her longevity? I hope that some of those who were around her to help her celebrate her 115th birthday had the opportunity to listen and learn from what Thelma’s life was like. I hope Thelma’s stories are somewhere, somehow preserved so they will be remembered and taken heed to.

The simple life may be what keeps most of the world’s oldest people “The World’s Oldest People.” But not all by any means. Some of the oldest people lived in large cities like Detroit.

The oldest recorded person lived to be 122 years old in France. Jeanne Calment drank champagne, smoked and ate rich food all her life completely ignoring her doctor’s advice. Jeanne Calment recorded a Funk-Rap song called “Mistress of Time” at the age of 120. Jeanne remembered serving Vincent Van Gogh in her father’s shop as a young girl when he came in to buy paint.

I hope Thelma told some stories that people listened to. She saw the world change drastically in those years; more than anyone in the years lived before her time. What memories she must have held.

Rest well in the arms of the angels Thelma, God bless.