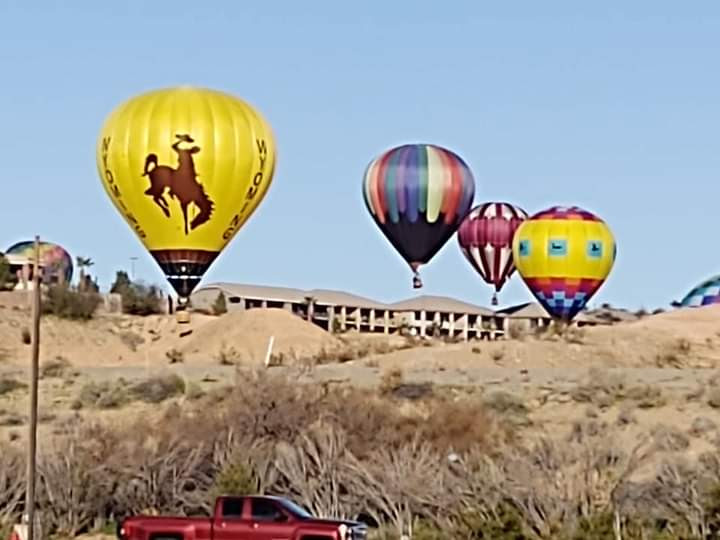 DAY 1 Friday, Jan. 28: There was a great turnout for this morning’s Hot Air Balloon Festival sponsored by Mesquite Gaming, unfortunately, the weather was not cooperative and no balloons were launched other than the pilot balloon. Pilots, crew, and community members were amazed by the way it danced in the wind just a short distance above the ground. Dancing is great when you have two feet firmly planted on the ground but you don’t want to dance much in the air where there are trees, powerlines and homes. There is no landing gear on the bottom of the baskets so landing has to be in a wide open and clear area. When the winds are that strong, flaying and especially landing can be deadly; that is not the goal of any pilot, ever.

Safe flights, including the landings, are the number one priority.

In the many years Mesquite Gaming has brought this festival to town there have been a few occasions that the launches couldn’t take place, that is the nature of the universe. No amount of planning or scheduling can guarantee anything when it comes to the weather. Because of their stringent guidelines, there has never been an incident. The event remains one of the most looked forward to events each year and continues to grow.

Many have asked why they hold the festival so early in the year when inclement weather is always possible and the answer is simple; heat.

Even though there was no launch this morning, nobody walked away disappointed. Several of the pilots set up the baskets and burners and did an educational hour with the crowd. It was a huge hit with the kids who were able to get inside one of the baskets. They were able to see how big it was, how the burners send up

the flames and hear some excellent tales of flights the pilots have experienced and the places their balloons have taken them. Mesquite Gaming’s Christian Adderson was happy to accommodate the smaller crowds and indulged their curiosity even though temperatures outside were chilly. He could have gone into his nice warm office but instead, hung out with the crowd and happily watched others enjoy themselves.

Look for the balloons in CasaBlanca’s parking lot this evening when they set up for the night glow. It is an amazing event. Mesquite Today will be out there live tonight as well.