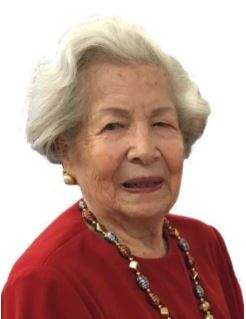 Linda Carlota Wilkins Davenport, resident of Mesquite, Nevada passed away peacefully on January 26,2022.  She was born January 31, 1925 in Trujillo, Peru daughter of Lastenia Aranguri Wilkins and Harry Walter Wilkins Sr., and was surrounded by a large family with lots of love, laughter, and adventure.
Linda was a beloved sister, wife, mother, Grandmother and Great-Grandmother, Great-Great-Grandmother, and friend.  Mother was like an ambassador to all. If you were fortunate to have met her you’d like her immediately. She was just that kind of person.
As a young girl, she and the family moved to Mahr-Tunnel, a small mining town high up in the Andes Mountains. There is where she met her husband, Robert A. Davenport, and was married on June 23, 1943.  During their 61 years of marriage, Mother and Dad moved and traveled a lot throughout the United States and Lima Peru. She use to brag about having moved about 36 times and was an expert at it.
Mother was a Cub Scout den mother, Boy Scout parent, a Brownie and Girl Scout mom. As an avid knitter, always made each of her children sweaters. At a young age she and dad would enjoy square dancing and after that transitioned to playing bridge. Mother entered quite a few bridge competitions, winning first place at the American embassy in Lima, Peru. She was also a Lifetime member of the American Literary Society, also based in Peru.
Mother loved tending to her garden especially her variety of roses.  Mother did lots of volunteering with the poor and needy in Lima, Peru teaching the women to sew. She was able to contract with an ice cream factory in Lima and had the women make the uniforms for this company.  Having been raised Catholic she felt it was important that her children follow the Lord she loved so much.
She leaves behind four children, Eric W., James R., John Stephen, Elizabeth “Betsy” Kirby.  Her grandchildren: Eric Michael, Robert John “Johnny”, Emilie Danielle, Nikkolai “Nikko”, Shanna, Alyssa, Tatiana, Matthew, Sarah.  She is preceded in death by her father, mother, sisters and brothers, and long-time husband.
Private memorial services will be held.  Friends and family are invited to sign an online guest book at http://www.virginvalleymortuary.com