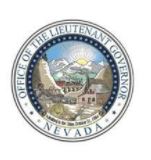 “I couldn’t be more thrilled to officially welcome Michael, Marco and Justin to the team,” Lieutenant Governor Cano Burkhead said. “These are three individuals who I believe in highly, and who can help me achieve the goals I set out when I accepted this position.

“Michael’s wealth of experience in Nevada, Marco’s expertise in coordinating political strategy and Justin’s ability to promote messaging will be invaluable in my role as Lieutenant Governor.”

Bio information of the senior staff can be found below.

Michael Cullen joins Lieutenant Governor’s Cano Burkhead’s Office after previously serving as Chief of Staff and Policy Director to Lieutenant Governor Kate Marshall. Before that, he worked on President Joe Biden’s Nevada team as a Deputy Coalitions Director, and was the Nevada Political Director for Secretary Julián Castro’s presidential race.

A graduate of Northeastern University School of Law, Michael is an attorney with a background in education law, specifically student services.

Marco Rauda comes to Lieutenant Governor Cano Burkhead’s Office after last serving as the Southwest Region Political Coordinator for the United Food and Commercial Workers International Union, where he helped locals with political, electoral and legislative programs in the Southwest Region of the United States. He has lived in Las Vegas since 1995 and has spent the past 15 years as a political operative in Nevada and the Southwestern states working on immigration, civic engagement, environmental and labor issues.

Marco will serve as a senior advisor to the Lieutenant Governor and Chief of Staff in policy, legislation and research, while identifying and executing plans and opportunities to enact priorities.

Marco was born in San Salvador, El Salvador, and immigrated to Southern California in 1988 before moving to Las Vegas seven years later.

Justin Emerson joins Lieutenant Governor Cano Burkhead’s Office as Communications Director after six years as a journalist with the Las Vegas Sun and Las Vegas Review-Journal. He spent the last four years as the Golden Knights reporter for the Las Vegas Sun, where he was honored three times by the Nevada Press Association, including as the 2021 Nevada Journalist of Merit.

Justin will work with the Lieutenant Governor and Chief of Staff to best communicate the message of the Office to Nevada. He will be the point of contact for the Lieutenant Governor’s Office regarding interview and statement requests, as well as all other media questions. He can be reached by email at justinemerson@ltgov.nv.gov.

Justin was born and raised in Phoenix, Arizona, and moved to Southern Nevada in 2016. He graduated with a master’s degree in journalism and mass communications from Arizona State University, and lives in the Las Vegas Valley with his wife, son and two dogs.

Lisa Cano Burkhead is a first generation Latina, the daughter of immigrant parents from South America who came to Las Vegas to find the American Dream. A lifelong educator, Lisa spent 25 years working in Nevada public schools, first as a Spanish and English teacher and later as an administrator and principal.

As Lieutenant Governor, she is an advocate for the needs of public education and uses her position and platform to uplift the voices of students, educators and parents.

The Lieutenant Governor serves as: