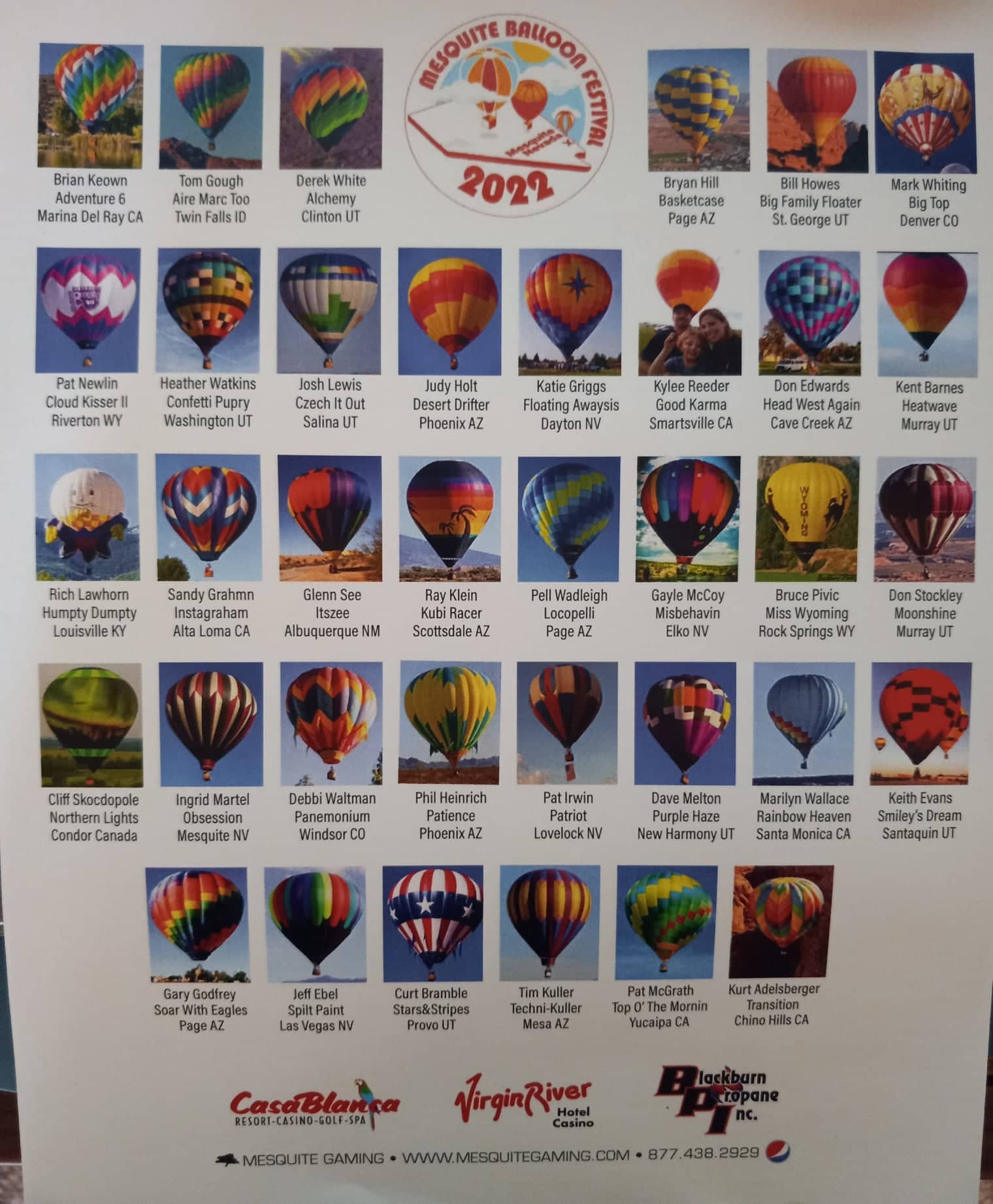 Several times it was falsely reported that the launches on Saturday and Sunday were delayed but there was never a delay on their schedule. Perhaps the reporting party was going on Mountain Standard rather than Pacific time. Balloons took flight Saturday and Sunday morning at 7:30 a.m. on schedule; right after the 7 a.m. meeting giving pilots the current weather reports from both St. George and Las Vegas.

Pilots began filling the parking lot at the Oasis about 6:30 a.m. Anyone attending the launch would have been met with good signs on Saturday and Sunday morning. When approaching the parking lot, you could see the trailers open and some baskets being pulled out in anticipation of the launch. Friday morning, all trailers were closed indicating that the weather wasn’t going to cooperate that day. It didn’t take the launching of the pilot balloons (Pi-Balls) to know there wouldn’t be a launch but they sent the Pi-Balls up to show the crowd how strong those winds were just about 30-40 ft. above the ground. Even after the launch was canceled, some of the pilots and event coordinators stayed and entertained the crowds sharing information on the burners, baskets, and other equipment. A couple of them set up the baskets and allowed the kids to climb inside and see what it was like.

Weather is always a factor in flying. Winds aren’t what you want when flying a vessel that has no steering capabilities or landing gear. Safety is always first and foremost for the event sponsors and pilots. The cooler the temperature (as long as it’s above freezing) the better but not so in case of the winds. While it may seem still and not so breezy on the ground, it’s an entirely different story when you get just 30-40 ft. in the air. Winds settled down by Friday evening and the “Night Glow” was a huge success.

The balloon called “Big Top” flown by Pilot Mark Whiting out of Denver, CO was the most daring of the weekend. He briefly landed on the roundabout Saturday morning. Sunday morning he took a trip to Walmart and landed front and center in their parking lot, near the garden center.

One of the crowd’s favorite balloons, “Humpty Dumpty” came from Louisville, KY.  Other pilots came from Colorado, Utah, California, Arizona, Idaho, New Mexico, and other parts of Nevada for a total of 35 balloons. There were 36 pilots scheduled for the event but one didn’t show, not bad for as far as some had to travel. Many of the pilots have been following the circuit and haven’t seen home for months. Some were looking for a bit of a reprieve after last weekend’s event and were heading home but all were thrilled to be here and share the love of their craft with others.

Mesquite Today was asked to participate in the event and eagerly accepted the invitation. Having covered the event for most of the ten years, I’ve been lucky enough to experience a balloon flight. My flight several years ago was with Ingrid Martel, a local pilot who flies a balloon called “Obsession.”

It was an experience I’ll never forget and love to share with others. I invited friends to take subsequent rides and covered their first-time flights. This year I was all set to cover a second flight taken by Jeff Dorsten but we were scheduled for Friday and the launch was canceled. Christian Adderson, Mesquite Gaming’s event director, did arrange for Mesquite Today to take a flight on Saturday but the pilot we were scheduled with had a teenager who was eager to try. There was no way I was going to bump her from that experience. It was sketchy at first, she was very nervous but Pilot Tom Gough from Twin Falls, ID was encouraging and patient. He told her if she got into the air and wasn’t comfortable, they’d come right back down; they didn’t.

Tom flew the teenager and his balloon “Aire Marc Too” over to the Hafen field across from the Casablanca Golf Course where they all safely landed.

The passenger didn’t want to be identified but she did say she was impressed by how silent everything was up there when they weren’t hitting the burners; those were loud.

The experience is like no other. The silence envelops you and there is no perceptible feeling of movement in the air. It is the most peaceful and quiet you’ll ever feel, and the view is absolutely amazing.

Mesquite Gaming reaches out to the community each year and allows residents to participate in being crew members or even in the flights. They have no trouble filling those spots, it is something the residents of Mesquite anticipate for weeks ahead of the event each year. Even with chilly temperatures and the early morning hours, there is no lack of participation or spectators who want that up close and personal view of the balloons, inflations, and launches; it’s all very impressive.

The balloons don’t just give a splash of color to the morning skies, the pilots inflate several balloons, others pull out their baskets and burners and treat the community to a vivid display of fire and light Friday and Saturday evenings during the scheduled “Night Glow.” Friday’s winds didn’t affect the night’s event and the night glows were a huge success. The night glows are a great opportunity to get up close and personal with the pilots and their equipment. Each night they had six balloons inflated and tethered and several baskets and burners set up. An announcer, at random times, would call out “All burn” and every balloon and basket would light up in vibrant color piercing the darkness. Other times the announcer would call for a “Twinkle burn” and balloons and burners would go off and on creating an impressive display for the crowd. Pilots took time to talk about their craft to all those who were curious.

If you ever can take part in this event, don’t pass it up. Being part of the balloon recovery and crew is just as exciting and a little bit confusing as I’m sure the chase team is unfamiliar with new places. Landing spots have to be pretty large and wide open. When you have an event as large as this one, there are a lot of chases going on. You have to know your way around so you don’t end up trying to recover the balloon from any distance. There is about 600 pounds of equipment to pack up and get into the trailer after the flight. After setting up the same and flying, you want to be as close to the recovery vehicle as possible.

Mesquite still has plenty of wide-open space for landing and the roads are pretty accessible. Some of the pilots mentioned the New Mexico festival has gotten so large and Albuquerque has been built up so much that flying these days is stressful. Mesquite is still one of their favorite festivals of the year and they look forward to many more festivals to come.

Mesquite Today would like to thank Mesquite Gaming, Christian Adderson, and Sharry Quillin for everything that made the festival weekend possible for me and for the community. It was an outstanding event.