Stopping the vicious cycle with a little help from your friends 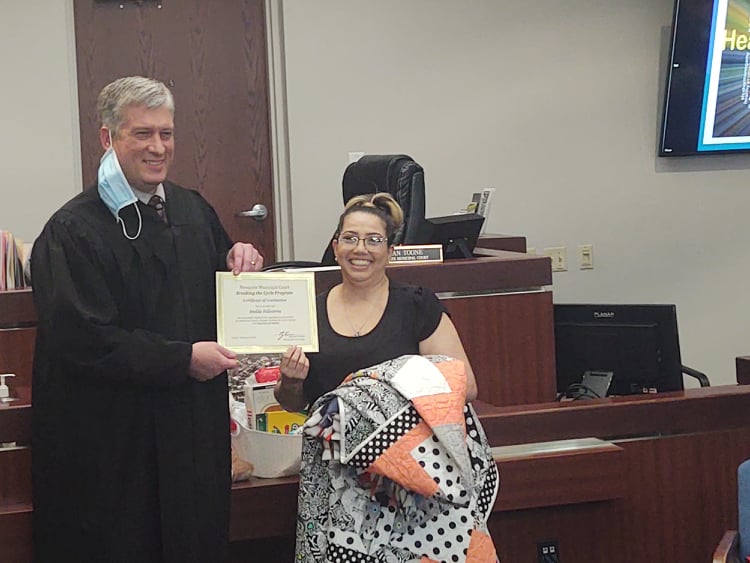 It’s not often that one gets into serious trouble with the law and can escape the consequences of jail or a permanent record, but if you live in Mesquite, you live in a town that completely supports second chances.

Such is the case with Mesquite Court’s “Breaking the Cycle” program. On Tuesday, Feb. 8, Imelda Vallesteros became the newest graduate of the program who successfully broke the cycle of drug addiction and avoided a substantial list of criminal charges. “Maybe the longest list that has been forgiven so far,” joked Judge Ryan Toone. There was some sort of inside joke, an indication that Vallesteros presented a few challenges at the beginning. They said she turned into a wonderful example of how well the program can work for those who come into it with a strong desire to succeed.

While in the program Vallesteros has achieved 672 days of sobriety, reunited with her friends and family, obtained improved living arrangements, is gainfully employed, gave birth to a healthy baby boy they named Gabriel or Gabby for short, completed parenting classes, obtained her driver’s license and is now financially stable.

According to Nevada Courts Overview, “Specialty Courts offer non-violent substance abusing offenders an alternative to incarceration. The goal of a Specialty Court is to break the cycle of the “revolving door” syndrome and support participants to achieve total abstinence from drugs and/or alcohol, by promoting responsibility and accountability, and teaching participants to become productive law-abiding citizens, which in return reduces criminal recidivism and provides for better, healthier communities.”

Their leader in breaking the cycle, Judge Ryan Toone, is the most avid supporter of the program and a seemingly perfect choice to be the General in overseeing the battles along the way.

To the casual observer, Toone is no pushover but he is compassionate and fair in both his rewards and consequences. One cannot detect even the slightest bit of negativity in his actions or words.

Judge Toone has personally experienced the success of this program having awarded 25 graduation certificates to date. Six healthy babies were born drug-free thanks to their mothers’ participation in the program.

Giving birth to healthy babies is one of the aspects of the program that really stands out for Judge Toon. He spoke about it in a prior interview where he stated, “I’m always excited when our graduates are able to build relationships with their family. We have had five drug-free babies that have been born to participants in our program. They are beautiful babies, and it doesn’t get better than that. When you have babies that are born to parents that are able to take care of them and give them a great start to life, you simply can’t top that.” Now Judge Toone can add one more baby to the list of children who are lucky enough to have parents who want a better life for themselves and their babies.

Judge Toone is encouraging and positive even when there is a slight hiccup in the participant’s efforts. Toone identifies the problems but quickly passes over the negative. He hands out the consequence with positive words such as, “I’m confident that next time I see you…,” and goes on to praise the accomplishments of the participant rather than condemning the momentary failure; without a doubt one of the main reasons the program is so successful in the Mesquite Courts. Others involved in the program have that same positive energy which makes it hard for the participant to have anything other than minor setbacks.

One can’t help but be motivated by the court’s constant words of encouragement and understanding that breaking the cycle of addiction isn’t easy for anybody, but it’s possible for everybody given the right tools and support.

The program is not designed to allow those who are enrolled to skate through it. Imelda worked harder in the program than she would have if she’d gone to jail but her future wouldn’t have been nearly as bright.

It takes years to overcome the stigma of a felony conviction but with Breaking the Cycle, participants can avoid the conviction from the start, if they successfully complete the program.

During the year, Vallesteros was working on winning the fight Toone and his army of probation officers, city attorneys, defense attorneys, and counselors were her constant source of both accountability and moral support.

Like many chronic diseases, addiction is not a condition that develops overnight. In fact, addiction is well-known for developing slowly and perhaps even unnoticed over time. The process of developing an addiction happens in stages just like any other chronic condition; the main difference is that the cycle of ailment, treatment, and relapse seems to be much more prominent and recurring in cases of substance addiction.

The cycle is so hard to break that between 1988 and 2009 the cost of corrections spending grew from $12billion to $52billion per year. In 2009 recidivism rates rose as high as 35.2% in state prisons and 8.2% in the federal system. Studies found 53% of drug users had at least three prior convictions/sentences prior to incarceration.

Across the country, studies found that 52% (east coast) to 80% (west coast and Chicago) of people arrested for crimes tested positive for at least one drug at the time of their arrest.

Breaking the Cycle treats the addiction in stages or “Phases” allowing for more privileges as the participants move to the higher stages of the program. There are several participants in the program at any given time. They are all in different stages but working together. With the support of Toone and his army, they hold them accountable to the community, the program, and to the standards they set for themselves.

Vallesteros is well on her way to living the good life of a broken cycle and she should. She is employed as a supervisor in the foodservice. She’s got a strong foundation, awesome motivation, wonderful community support, and a great attitude.

Community support is important. Judge Toone stated, “This program really wouldn’t exist without people in our community who have rallied around it and supported our participants. We really appreciate it and want them to know that we really value their help with the program.”

Lindy Hulet is the ‘all hands-on deck’ person who coordinates a host of activities and schedules for the program. Hulet said, “Continued support is so important that is why we began doing a sober activity at least once or twice a month. It helps participants realize that they can have fun in the community. They can do things while they’re sober that they may not have done before. If they find an activity that keeps them occupied and satisfied, they have a much better chance of success.”

Hulet sets up a host of various activities that range anywhere from Bowling to “Paint Nite.” She sets events up with “interest levels” in mind but also wants participants to try new things. You never know what interests you until you’ve tried.

Mesquite might have a slight advantage over participants in a similar program elsewhere. Mesquite is a town that supports second chances and sometimes more.

When Judge Toone said he and the team could not make this program successful without the help and support of the community, he wasn’t speaking off the cuff. Community involvement has been remarkable.

Each time a graduate completes the 18-month long program, the attendees fill the courtroom.

From friends and family members to employers and city council members, the community proves the adage, “It takes a village.”

It takes a village because the participants of the program are repeat offenders. None are new to the crime or drug scene; both are equally difficult to overcome. Without constant, positive support, many people find themselves falling back on old habits. Judge Toone says, “The team doesn’t just consist of the people on the courtroom side of the doors. Mesquite’s Breaking the Cycle Program is only as successful as it is because the entire community becomes the team.”

Program requirements mandate a person must be a repeat offender to be eligible although current charges are what is addressed in the program. If the program is completed successfully charges that brought the individual into the program are dropped.

Any charges that had a disposition prior to the participant’s current charges would still need to be addressed and possibly cleared down the road. Depending on where past charges originated and what the convictions were for some courts will allow a person to have past cases sealed. There is a legal process to doing so and it requires staying out of trouble for some time.

Of all the graduates most of them are still successful. The program has not hit a 100% success rate and there have been just a few who have had continued challenges but the courts continue to work with them; the team never gives up.

Judge Toone said he did not care how long a graduate has been out of the program, as far as his team is concerned, their’s is a lifelong commitment. If you need help five years down the road, they won’t abandon you.

If this is you or someone you know, you might be lucky you got caught in Mesquite because when you break the cycle here you gain a path to freedom.