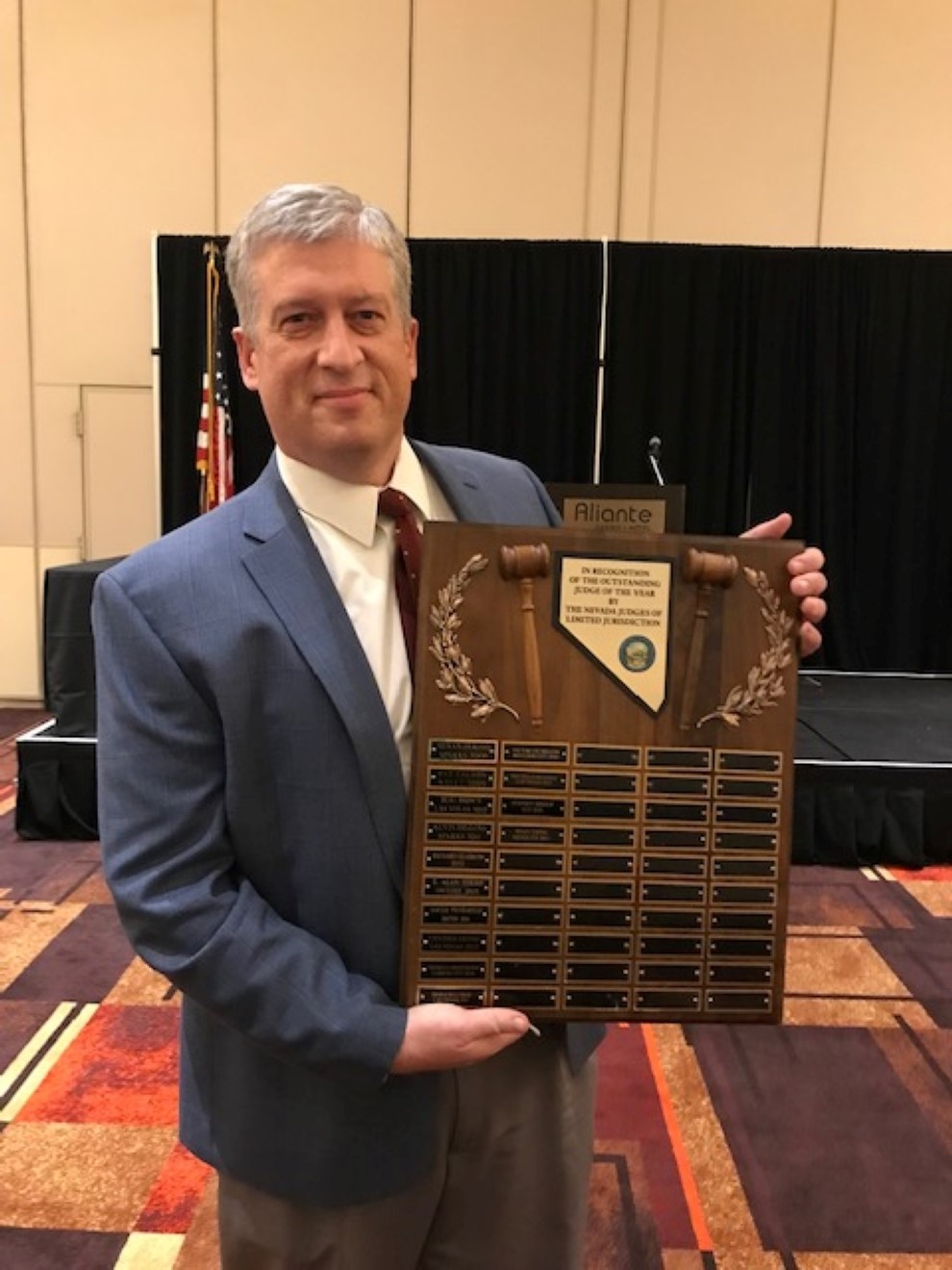 City of Mesquite Judge Ryan Toone was awarded “Judge of the Year” at a dinner held in Las Vegas on January 27, 2022 for the Nevada Judges of Limited Jurisdiction.

Justice Court, Mesquite Township has one Justice of the Peace elected for a six-year term. Justice Court hears probable cause, arraignments, preliminary hearings, misdemeanors, bond forfeitures, evictions, small claims and civil matters where the amount in controversy does not exceed $15,000. Other duties performed by the Justice of the Peace include setting bail, issuing search warrants, summonses, protective orders and arrest warrants.

Judge Toone was elected as Justice of the Peace in 2012 and took the bench in Jan. 2013. He’s had the back of many Mesquite residents since then.

Breaking the Cycle is one of Judge Toone’s passion projects.

According to Nevada Courts Overview, “Specialty Courts offer non-violent substance abusing offenders an alternative to incarceration. The goal of a Specialty Court is to break the cycle of the “revolving door” syndrome and support participants to achieve total abstinence from drugs and/or alcohol, by promoting responsibility and accountability, and teaching participants to become productive law-abiding citizens, which in return reduces criminal recidivism and provides for better, healthier communities.”

To the casual observer, Toone is no pushover but he is compassionate and fair in both his rewards and consequences. One cannot detect even the slightest bit of negativity in his actions or words.

Judge Toone has personally experienced the success of this program having awarded 25 graduation certificates to date. Six healthy babies were born drug-free thanks to their mothers’ participation in the program.

Giving birth to healthy babies is one of the aspects of the program that really stands out for Judge Toon. He spoke about it in a prior interview where he stated, “I’m always excited when our graduates are able to build relationships with their family. We have had five drug-free babies that have been born to participants in our program. They are beautiful babies, and it doesn’t get better than that. When you have babies that are born to parents that are able to take care of them and give them a great start to life, you simply can’t top that.” Now Judge Toone can add one more baby to the list of children who are lucky enough to have parents who want a better life for themselves and their babies.

Mesquite Today would like to congratulate Judge Toone on a job well done. Thank you for having Mesquite’s back.