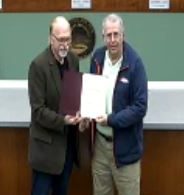 “The nomination was for a man who has made numerous contributions to our community year after year.

A veteran of the United States Navy, this nominee served several tours overseas and in various locations within the U.S.

After settling in Mesquite with his wife Susan and daughter Shannon, he soon became active in the Veteran’s Honor Guard who provides colors for a very wide range of activities in Mesquite.

In recent years this nominee has taken on the role of coordinator for the Honor Guard with the highest priority to ensure that our veterans who pass away are provided with colors and full honors should that be their wish. At either their funeral or at a memorial service.

The nominee is also an officer in the Arlo Leavitt American Legion Chapter in the Veterans Center in Mesquite.

For 12 years this nominee has been an active volunteer and athletics coach in the Special Olympics Program in Mesquite. This wonderful group of volunteers organizes and supports a wide range of activities for Mesquite citizens with special needs.

We can only imagine the patience, gentleness, love, devotion and time required to enrich and improve the lives of our special needs citizens.

This nominee quietly and humbly goes about his work with these events and in the process demonstrates nothing short of profound character and integrity.

For several years this nominee served as a coordinator for the grudge match called the “Mesquite Cup” which is an annual golf tournament between the Mesquite Men’s Golf Association and the Oasis Men’s Golf Club.

During the quiet summer months, this nominee plays a lot of golf and severs as the secretary/treasurer for the Merchant’s Bowling League at the Virgin River Bowling Center.

I am proud to present the 20-21 Distinguished Service Award this year to Mr. Paul Levan.” (Mayor’s Speech before the award presentation.)