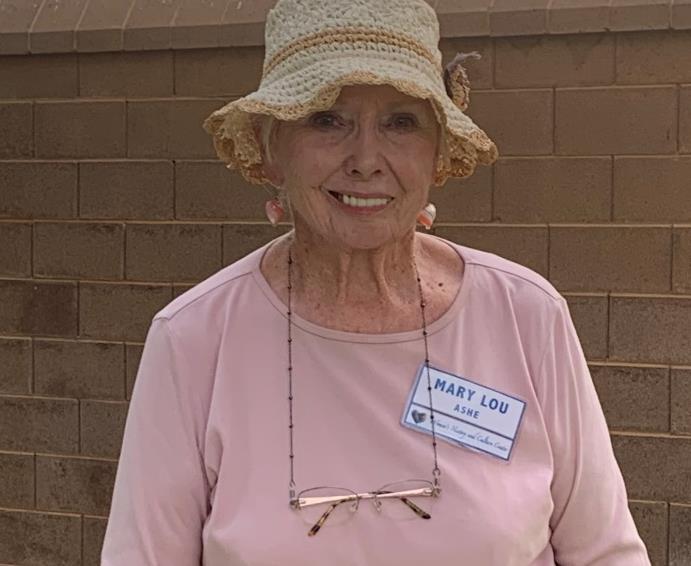 Volunteers are the engine of all non-profit organizations. Mary Lou Ashe is a Champion Volunteer of the Women’s History and Culture Center. Her level of dedication to WHCC makes her a valuable partner. She has earned the title of Champion Volunteer.

Mary Lou began volunteering at WHCC in 2018. Her life experiences were a gift to this new center that Jean Watkins was setting up. Mary Lou recalls being inspired by a high school geometry teacher who wore his military uniform to school on military holidays and talked about his pride of service and patriotism. She absorbed that it’s not what you have that is important. Instead, it is what you give and receive that you treasure. Since that time, Mary Lou has continued to make herself invaluable at WHCC as a greeter, a helper in many events, maintaining the cleanliness of the Center, and hosting her own group there as well. An avid reader, she reads books in the well-stocked Center library. Those books inspired Mary Lou to write a book and begin the Writers Group that meets regularly at WHCC. She considers WHCC to be one of the treasures of her life.

During a recent interview with Mary Lou, I asked what she noticed first about WHCC. Her response was that every individual she met at WHCC was there to support and give. “I think sometimes all a person needs to feel is needed. When someone asks you to volunteer, what they are really saying is, we welcome and need you to be a part of us.”

Who is Mary Lou Ashe? At 18 Mary Lou joined the Marines. While in boot camp, she was assigned to a lifeguard team. She was already certified as a swimming instructor. What they didn’t know is that she had been a synchronized swimmer for years. The breath control she gained as a synchronized swimmer helped Mary Lou to win challenges over her male teammates. These challenges were meant to get the two women on the team to cry “uncle” and disqualify them from the team. Mary Lou turned the game on them. As a result of her performance there, she earned the respect of the men, along with the nickname, “Dirty Mary”. During her career as a Marine, as in the rest of her life, Mary Lou has learned the value of tenacity and teamwork. She is the mother of two, grandmother to seven, and great-grandmother to 18.

Mary Lou shared, “Each one of us has the power to create our own heaven or hell on this earth. Happiness comes from within. A challenge has to be felt from inside for us to be successful.”

As a Veteran, Mary Lou continues to serve. In addition to her work at WHCC, Mary Lou gives to the broader community when she sees a need. She serves on the Honor Guard. An avid walker, she picks up trash and dog waste on the street whenever she sees it because “I don’t want a visitor to see it.”  When asked what drives her, she replied, “Leave the world better, be proud of where you are. Where we are is now – live in the now. Don’t say you’ll do it tomorrow – do it today.”

At the end of our interview, Mary Lou shared her favorite Oscar Wilde quote:

Don’t try to be somebody else. You have to be yourself at all times. Be yourself. The world worships the original.

Thank you, Mary Lou Ashe, for being part of the WHCC AND the Greater Mesquite community!

WHCC builds on women’s historical achievements to light the way for future generations by providing resources, opportunities, and activities that make a difference in the greater Mesquite community. For more information, visit whccmesquitenv.org