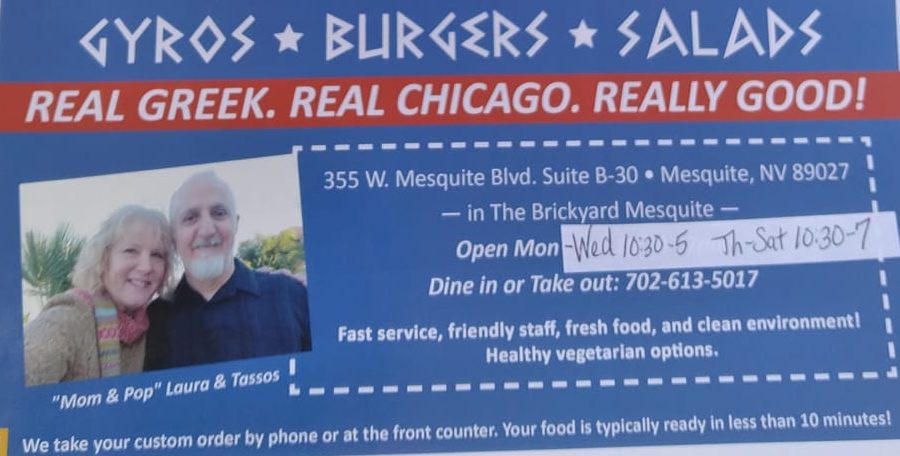 It has been said that Greek food is the best in the world. Not just because they use fresh vegetables and local meat and fish and because they don’t over-power with spices, but because it comes with the whole package of food, music and conversation that can go all afternoon or all night long. As anyone who has visited Greece will tell you, eating and drinking is a way of life. When you combine the former with a man born in Greece but who grew up in Chicago, who worked in the family business and has a passion for heritage and tradition you get Chicago Greek. It has been said that Greek food has also been good for Mesquite. They began their journey five years ago and are going stronger than every with a lot of committed and loyal customers. Good job!

Does your mouth water just thinking about a traditional Gyro, a Chicago Chili dog, a hot pastrami sandwich or Italian Sausage? Opening soon in Brickyard Plaza is the new Chicago/Greek style cuisine many of you have been waiting for.

Owner Tom Spentzos is excited to bring the traditional Greek and Chicago favorites to your table. The menu has changed slightly over the years but contains a good amount of items, many of which can be purchased as either a sandwich or a dinner. If it isn’t on the menu, don’t hesitate to ask. If Chicago Greek has the ingredients, they’ll whip it up special for you.

The restaurant offers Spanakopita which are delicate handmade appetizers that contain a delicious blend of spinach, cheese and savory seasonings wrapped in a crispy filo shell.

You’ll want to ask about their flaming cheese dish called Saganaki. It is served with warm Pita bread and is outstanding. Your mouth will water just smelling it and your tastebuds will thank you.

For the coffee lovers in town, you can expect to be served a freshly ground and brewed cup of java. It’s even better served up with a nice bowl of homemade rice pudding or a little Baklava; both of which are yummy. Spentzos is insistent on using the very best, fresh items in his cooking and in the side dishes. He said, “It doesn’t matter how good the sandwich is, if you get a bad batch of French fries or a bad cup of coffee, it will spoil the whole meal.” Even his buns are top of the line Brioche. Andrews whips up the best Tzatziki sauce this side of the Mediterranean; you’ll love their traditional gyros; order extra tzatziki, it’s worth it.

There are also a few untraditional favorites you can taste. Spentzos has taken some of the traditional Greek dishes such as Orzo, which is a staple in Greek cuisine, and mixed it with rice. He first sautés the orzo in butter and onions, adds in the rice and the chicken stock. He says it gives the rice and orzo a unique taste as well as texture and it’s wonderful.

Dine-in a relaxed and casual atmosphere, pictures of Greece are on the walls and the decor has been chosen to mimic the feel of the cool, blue Mediterranean.

Through the covid years co-owner Laura Andrews put her talent and quick thinking to work, they just had to find a way to survive and they did.

They began with curbside pickup, it kept people coming slowly. Spentzos feels that the casino closures pushed customers their way. They reduced their business hours slightly and Andrews was all over social media letting folks know they were still there for them.

The restaurant owners and employees participated in the Mesquite Cares’ program, Delivering with Dignity.

“Citizens here apply based on their financial needs to receive meals and the City of Mesquite program has picked out five restaurants who they felt were COVID compliant,” and they prepare approximately 50 meals at a time, Andrews said. “Three different meals for each person or family.”

Spentzos and Andrews also made good use of the down time by upgrading the restaurant for a fresh, homey feel.

So if it’s a taste of Chicago or Greece that has your mouth watering, stop by Chicago Greek, in the Brickyard Plaza, taste some traditional favorites, enjoy some good conversation and the best cup of coffee in Mesquite.