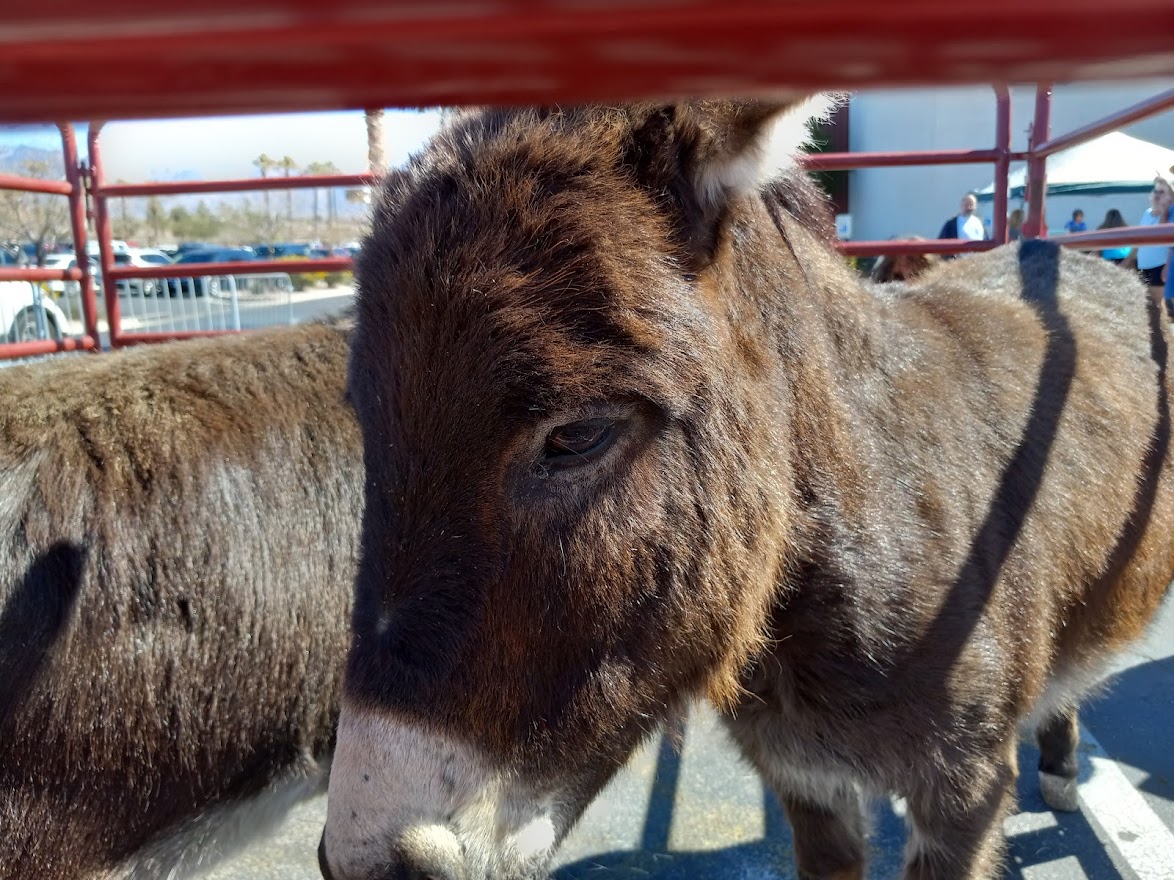 Peaceful Valley Donkey Rescue held its Eigth Annual Donkey Jamboree on Saturday, March 12. The annual fundraising event was sponsored by and held at the Eureka Casino Resort with a great turnout and, according to many, it was a huge success. The event gets bigger and better every year. The weather this year was perfect for man and beast.

The PVDR was founded by Mark Myers in 2000 after his wife bought a donkey of the internet as a companion to her horse.  The couple had never had a donkey before and they loved it.  “It was just like a big dog”, said Myers. “Buying that donkey was like buyin’ a big ole pickup…you’d never really notice a whole lotta pick-up on the road until you buy one and then you notice them all over.  Well that’s how it was after we bought that dang donkey, there was donkeys everywhere.  The donkeys we were seeing weren’t friendly and loving the way ours was though.  They had green snot hanging out of their noses and sores on their bodies, they had issues of all kinds so my wife bought ‘em.  We paid people to drive ‘em to our house and I’d sit up with em at night and talk to ‘em.    We kept that up until we had about 25 donkeys.  We thought then that we’d better find a way to get these donkeys outta here and the easiest way was to start a rescue that way we can have an adoption program and we’d have control of where these donkeys go.”

The Myers’ passion for donkeys and their welfare has turned into a nationwide organization.  The PVDR is coast to coast and border to border working in 28 states with adoption facilities all across the country and by number of animals rescued and by geographic location. they have become the largest animal rescue organization in the country.

Currently, the Meyer’s are rescuing 40 donkeys that were found on purchased land. When the landowners bought the 40 acres, they had no idea there were donkeys on the land. When they were discovered, immediate action needed to be taken. The donkeys were all in an enclosure with no way out. There was no telling how long they had been there or what condition they were in health-wise.

Fundraisers like the one held on Saturday are one of the ways Peaceful Valley has been so successful in its endeavors. The other way is the volunteers who tirelessly devote their time to the care and training of these beautiful animals.

Through programs like the Scenic, AZ location, donkeys are transitioned from their life on the open desert and the danger they face to a much more peaceful, relaxed, safe and loving environment.

They are taught to have good donkey manners – well, some of them anyway. The expression, “Stubborn as a mule” isn’t far off when describing their ‘genetic halves.’ (A mule is the offspring of a donkey and horse.)

So many volunteers are needed to pull off such ventures and Joan Dunkle, the owner of the Arizona Satellite, has quite a few very dedicated people who show up on a day-to-day basis to feed, exercise, brush…the donkeys who have a permanent home in her pastures.

The intake training facility across the road from Dunkle is still Dunkle’s land she lent the land on a long-term basis to Peaceful Valley Donkey Rescue Operations, it is run separately.

Dunkle’s personal pastures are home to Senior Donkeys and those otherwise considered unadoptable due to health issues or other special needs.

There are a few donkeys in Dunkle’s pastures that love a crowd and are proud ambassadors for their fellow beasts. Pepper and Beau are the two mini donkeys who were happy to get all the attention at the Jamboree. Cookie, who prefers to stay at home loves to cheese for the camera each year during the annual Christmas with the Donkeys which is held at the sanctuary. Christmas with the Donkeys is the perfect opportunity for locals and non-locals to gather a greater understanding of how amazing the work being done by Myers, Dunkle and all the volunteers is.

Bottoms Up Band continues to rock the Jamboree each year and this year was no exception. They kept the crowd moving to their groove as always. Not only did people get up and dance on the floor in front of the band, but they were also dancing at the tables (some in their seats), with the donkeys and at the ticket sales booth. Mesquite Showgirls Kathy Bussman, Linda Villaneuva and Becky Boyd didn’t stop encouraging the crowd to have dance and have fun while buying up those tickets that could potentially win them a great gift donated by one of the local businesses.

Thank you, Mark Myers, Joan Dunkle, all the volunteers for a very pleasant and purposeful Saturday. A special thanks to Pepper and Beau for being so charming to all who came to help with your mission.

One thought on “A Jammin Eighth Annual Jamboree”