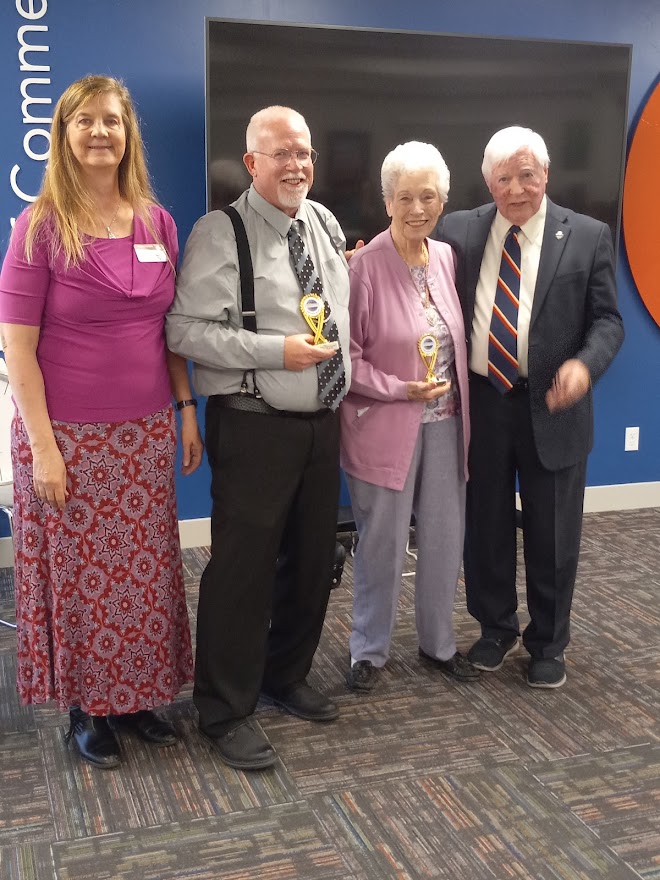 On Saturday, March 19, several Mesquite Silver Tongue Toastmasters (MSTT) ventured to St. George for an International Speech Competition. Barbara Kilbourn, took second place in the competition with an impromptu speech titled, “How did I get this old?”

Barbara is 86 years old and was only notified of the contest the day before. There was no time to prepare, rehearse or even think about what she was going to talk about. She only decided when she entered the doors of the St. George Chamber of Commerce which was the venue for the contest. Barbara has 20 years + with Toastmasters International. Regardless of whether she had something “PREPARED FOR COMPETITION” or not, she was well prepared to stand in front of friends, family or strangers and brilliantly speak for ten minutes on any given topic. With four area clubs joining the competition from Las Vegas to Cedar City there were more than a few strangers to speak in front of. They didn’t stay strangers for long though; Toastmasters never do. Barbara told us about her life, some accomplishments, and some struggles that led her to her 86th year of life. She was eloquent, captured the attention of everybody listening and brought one more trophy home to herself and a victory to the MSTT.

Part of being a Toastmaster is learning to positively critique the speeches made by other members so they become aware of their bad speech patterns, pauses, um’s, and ah’s; things that make it hard to follow a public speaker. When they become more aware of their own speech patterns they can correct anything that needs attention. Evaluators are never critical in a negative way, Toastmasters encourage others always, they love to build people up. Evaluations are a big part of the learning process, enough so that “EVALUATIONS” or “EVALUATORS” are also a part of the competition. That is where yours truly had to step in. Contests are also part of being a Toastmaster but it’s never a required part. You can work on your personal journey without competing.

I was just going along to help support my family. Barbara was prepared to speak about something and Doc Vern Kilbourn, Barbara’s hubby was going to be an Evaluator in the contest. For any of you who have followed the Mesquite Today podcasts in the past, you know that Doc Vern was a regular guest. You may also know that the Doc suffered a stroke a few months ago. He’s doing fine, healthy as a horse but his speech has been slightly affected and he didn’t feel as if he could go up and do a good job in the competition so Barbara asked me to fill in. I did because being a Toastmaster for the past two years has helped me get over my fear of speaking in front of people. I did not win but I didn’t expect to either. I had never been an evaluator on a competitive level and was a bit unsure of what criteria they were looking for in competition but our club needed a representative in the contest so I winged it. Every club member, Area Director, Debra Terry, and even District Director, Jinks Dabney, who is an accomplished public speaker, recognized me for stepping up to the plate at the last minute; I was just happy to represent the club and not embarrass them or myself. Again, Toastmasters are a very encouraging bunch of friends and family.

Speeches and Evaluations are also timed. Going under or over the specified time disqualifies a person from the competition, one member plays the role of timer. In the case of the International Competition, timing is crucial and there wasn’t a designated timer set before the contest. That’s where MSTT Carol Livingston stepped up to the plate for our club. Carol has never been a timer for our club and especially not for a competition but she stepped up and did an outstanding job of keeping everybody notified of their time constraints. It’s not easy.

Two timers, appointed by the chief judge keep the official record of the time of each contestant’s speech. One timer is ­provided with a stopwatch and the other with a signaling device that displays green, yellow, and red colors.

Timers shall provide warning signals to the contestants, which shall be clearly visible to the speakers but not obvious to the ­audience. Any visually impaired contestant is permitted to request and must be granted a form of a warning signal of his or her own choosing. If any special device and/or specific instructions for such signal is/are required, the contestant must provide the same.

Any contestant is disqualified whose speech time is less than the minimum or more than the maximum time indicated below. In all speech contests, no signal shall be given for the overtime period. In the event of technical failure of the signal or timing equipment, a speaker is allowed 30 seconds extra overtime before being disqualified.

All speeches delivered by contestants must conform to the timing guidelines for the contest.