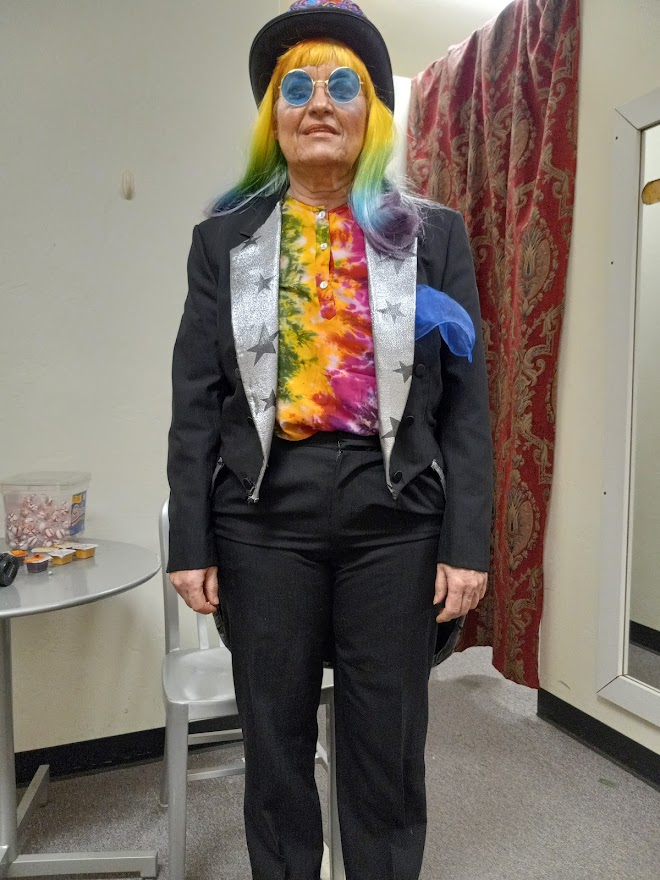 They may be singing the Wedding Bell Blues in Lizard, NV but watching them sing em will give you anything but. Don’t miss your last chance to see how the Virgin Valley Got its Groove on.

Being quite the Thespian himself over the years, Utermoehlen loves to attend productions. The big question was, how did he find out about the Mesquite Community Theatre (MCT) and the show while living in Vegas? Does the Virgin Valley Theatre Group (VVTG) advertise in Las Vegas? The answer is no, they do not. They do, however, advertise with other little theater groups in the Valley. That is how Utermoehlen found out about Wedding Bell Blues.

Utermoehlen attended a production of “The Curious Savage” at the Moapa Valley Community Theatre and discovered the ad for Wedding Bell Blues in their program. It intrigued him enough to weather the traffic storm and endure the three-hour crawl to Mesquite.

He enjoyed the show so much that he plans to be back for other shows and was quite excited about some of the upcoming performances listed in the MCT’s program. He does wish there were a different route to take and may decide to wait until the traffic situation is moving at a bit faster than a snail’s pace, but you never know.

Utermoehlen said, “I’ve spent more than+ 50 years working as the Director of Highway Safety Enforcement. I’ve also worked in Surfaces Coal Mining Land Reclamation & Railroad Reloading Businesses. I have been the CEO of corporations with revenues in the $5 million-plus level and now I’m enjoying my semi-retirement in “The Entertainment Capital of the world, Las Vegas, Nevada!” He’s seen a lot of entertaining shows and highly recommends this one.

If laughter is contagious, you’re gonna be laughing, Auntie Rainbow Trout and Uncle Lucky Chance are a hoot. I can’t tell you too much, I don’t want to spoil anything for you.

This show was written by VVTG’s own Nancy Arnold and Sue Kjellsen; they’ve written in plenty of places where the audience can boo, hiss, cheer, applaud and even sing along if you have a hankering to do so. Nancy and Sue have brought us from the founding of Lizard, NV and the plenty good as well as no good characters that were there from the start. Now their kin are still here generations later. Join the group (its an interactive show) as they give you a view of what may have been happening in Lizard, NV in the Sixties. They’ve got the actors in some really far-out costumes thanks to Costume Designer Marnie Bartolini.

There’s a ‘Far out” good time to have in Lizard; you’ve just got to get there. No, you don’t have to get married, plenty of you already are. You don’t have to drink a potion for a ticket either, you’ve just got to mozy on down to the Mesquite Fine Arts Center and purchase a ticket, they take credit cards now, for your convenience, or you can get there up to an hour before showtime and hope they ain’t sold out.

If you wanna know more, you’re gonna have to see for yourself.

Click on your preferred date to buy tickets at https://www.mctnv.com/upcoming

Mesquite Community Theatre Box Office every Thursday 4-6 pm and one hour prior to each performance.