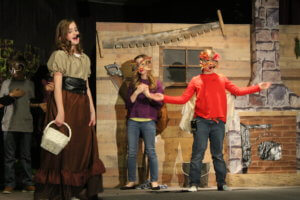 J.L. Bowler Elementary School kids want to take you on a magical, musical triple dip into the wonderful world of chocolate with three performances of Willy Wonka. Performances are scheduled for Friday, April 1 @ 6 p.m. and Saturday, April 2 @ 1 and 4 p.m.

The Musical version of Willy Wonka KIDS is written by Ronald Dahl and brought to the J.L. Bowler Elementary School as part of the Disney Musical in Schools Program (DSMP). The DDMSP is brought to Clark County Schools through the Smith Center for the Performing Arts. The mission of the DMSP is to develop a sustainable musical theatre program in schools.

Disney Theatrical Group joined forces with the Smith Center to bring Disney Musicals in Schools to students at Bowler Elementary School in the 2016-17 school year.

Teri Nehrenz and Susan Schultz were chosen as the local teaching artists to lead the program in Bunkerville when it began.

Disney Musicals in Schools is a free outreach program offered to a limited number of public elementary schools each year. Through the program, schools receive free performance rights and show kit materials for a 30-minute Disney musical written especially for elementary school performers.

It was an amazing experience but didn’t require a whole bunch of teaching on the parts of Susan or myself. The teachers picked up their roles as director, choreographer and set designers like pros. Within just a couple of weeks of beginning the program the teachers took the lead easily and the kids were amazing! There were 90 kids in the program, half of them were performers, half were set designers. They lacked nothing in their talents to perform or create the most magical set one could imagine.

They responded well to the teachers they trusted for all their learning needs. They were dedicated, enthusiastic and well-behaved during the entire 17-week process.  The kids picked up their lines and dance steps far easier than I’ve seen some adults do it.

What truly made the experience more exciting was the enthusiasm shown by their principal, Chris Jenkins. Mr. Jenkins supported these kids in spirit and in practice. He put his money where his mouth was donating and purchasing sound and light equipment out of his own pocket so these kids were able to really shine, and they did!

Years later, they’ve honed their skills. The teachers have been doing this for years now and some of the fifth-grade students as well. I haven’t attended the show yet but I’ve no doubt it will be one worth seeing.

Tickets are only $5 per person or $15 per family (no matter the size). All proceeds stay in the program to fund the materials (scripts and rights to perform, costumes, set materials etc.) Due to some Covid restrictions, audience size is limited to 250. Tickets can be purchased in advance by calling 702-346-1900. You’re going to be taking a big chance if you wait until performance day but tickets, if available, can be purchased at the door prior to the shows. HINT: Don’t wait, kids’ shows sell out quickly.

Take a look at what the students did their first year in the program all photos by Teri Nehrenz: