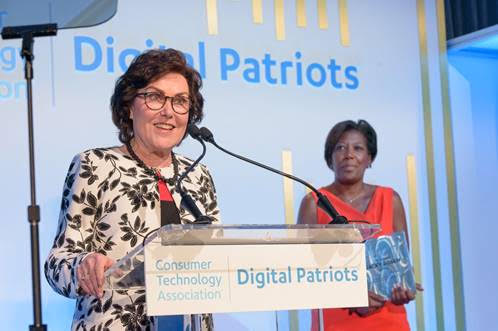 WASHINGTON, DC – Last night, U.S. Senator Jacky Rosen (D-NV) was honored by the Consumer Technology Association with their Digital Patriot Award. This award honors the achievements of government and industry leaders who champion policies and practices vital to innovation in consumer technology.

“Technology has the power to improve people’s lives, strengthen our economy, and lift up our nation, which is why I was proud to lead the largest delegation of Senators to ever attend CES earlier this year,” said Senator Rosen. “As the first and only computer programmer to serve in the U.S. Senate, I’m honored to receive the Digital Patriot Award. I will continue fighting to make technology and STEM education accessible to everyone across Nevada and our nation.”

Senator Rosen has been a leader in advocating for technological advancement and improving access to STEM education and careers. She helped write the broadband section of the Bipartisan Infrastructure Law, which is delivering $65 billion to make high-speed internet more available and affordable to Americans. Last year, Rosen launched the Senate’s first bipartisan Women in STEM Caucus alongside Senator Shelly Moore Capito (R-WV). Senators Rosen and Capito also introduced and passed the bipartisan Building Blocks of STEM Act, which was signed into law in 2019 and provides research grants through the National Science Foundation to increase the participation of young girls in computer science and enhance support for early childhood STEM education.