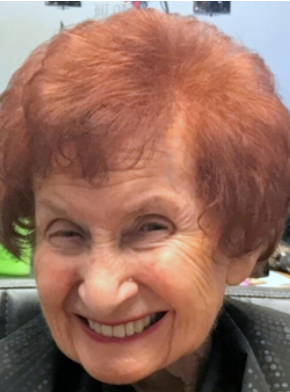 Sally Fuller was peacefully born to eternal life with family at her side in her Mesquite, Nevada home on Saturday evening, April 9, 2022. The youngest of 10 children, Sally Fuller was born as Salomae Elizabeth Gruszka on April 5, 1925 in the rural town of Lafferty, Ohio. She was born at home since there were no medical facilities nearby.

In the spring of 1946, Sally graduated as a Registered Nurse of the Operating Room from Little Company of Mary Nursing School and Medical Center in Chicago. She then moved West, first working at a large hospital in Seattle, WA, then went on to Olympia, WA, where her sister Ann & husband Jim were living. Sally began working at St. Peter’s hospital. One day in May of 1948 her sister and brother-in-law took her to a place in downtown Olympia called ‘Roy’s Place’ to meet a young Sailor and bartender, Monroe (Skip) Fuller, because they thought he was such a good guy. When Sally left, Skip told his friends “I’m going to marry her someday”! They were married at St. Michael’s Catholic Church on July 31 of that same year in Olympia. Skip and Sally remained in Olympia for a while. She continued working at St.Peter’s and Skip at Roy’s Place. The long-standing story was that Sally made more money than Skip and they would not have had a honeymoon if it weren’t for Sally’s job!

Children came shortly thereafter. Their first child, Kathy Ann (Bob Zehnder), was born in Olympia in May of 1949. They had 5 more children, all boys. Kenneth Jay (Linda), Olympia, November of 1950, Mark Monroe (Brenda), Anchorage, Alaska, 1952, Michael Jan (Kathryn), Anchorage, Alaska in 1954, Joel David (Janette), Long Beach, California, 1958 and Robert Harlan (Tamara), Anchorage, Alaska, 1962. Skip and Sally remained self-employed for the rest of their careers. Sally worked full-time devoted to their home and businesses, six children and extended family. They moved a total of 19 times in the course of their lives, between Washington, California, Alaska, Oregon and Nevada. The joys of her life included making a life with Skip, raising their children, her family, her deep devotion to the Sacred Heart of Jesus and to the Catholic Faith, cooking, gardening and sewing. She also enjoyed hosting holiday dinners and family/friend gatherings, scouting, music, horseback riding, billiards, bowling, cross-country skiing and sunsets with her grandson James Zehnder!

Sally was preceded in death by both of her parents, all her siblings, her husband (Skip), one son (Mark), one Grandson (Eric Z.), Son-in Law (Bob Z.), and several nieces and nephews. She is survived by 5 adult children Kathy Z., Kenneth, Michael, Joel (all 4 from Alaska) and Rob (Mesquite, NV), more than 48 grandchildren, great and double-great-grandchildren and many nieces and nephews.

Viewing and Rosary will be held at Virgin Valley Mortuary, 320 E. Old Mill Road, Mesquite, NV, on the evening of Monday, April 18 with a Rosary beginning at 6:30pm and public viewing and respects beginning at 7:00pm. Sally’s funeral Mass is open to the public and will be held on Tuesday, April 19 beginning at noon, La Virgen de Guadalupe Catholic Church, 401 Canyon Crest Drive in Mesquite, Nevada. Afterward a brief graveside final farewell at the old Mesquite Cemetery, immediately followed by a celebration reception.

In lieu of gifts or flowers, a contribution in her name to any organization in your heart that helps people who are in need, would be an honor to her memory. Arrangements are under the direction of Virgin Valley Mortuary in Mesquite, Nevada – 702-346-6060.  The family invites you to leave a message or memory in their Guest Book at http://www.virginvalleymortuary.com