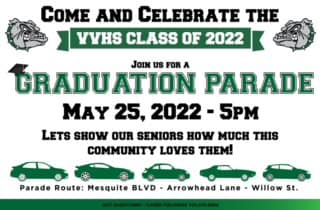 Let’s celebrate the VVHS Class of 2022 by having a Graduation Parade on May 25th at 5pm. It will start at Arrowhead and head East on Mesquite Blvd. We need to show our Graduates how much this community loves them.” (Karen Fielding)

It’s round three and Karen Fielding is proving once again her commitment to the community and our youth.

Fielding is organizing the Third Annual VVHS Grads Parade and she’s looking for you to show up along the boulevard and show the 2022 Grads some community support.

The parade was the idea of Fielding and a few other mom’s when in 2020 the graduation ceremonies were not allowed to be sponsored by the school.

That was unacceptable that the kids weren’t going to be recognized after their years of hard work. Moms plus Fielding put on quite the graduation night OUTSIDE of any school involvement.

Many of the teens voiced that it was the most memorable graduation they could have imagined, and it stuck. Although the school took on the graduation ceremonies once again, the parade is not a part of the school’s program. That’s where Fielding and other moms come in by keeping the parade tradition, started three years ago, a permanent graduation fixture.

Fielding and the parents don’t mind, they believe the kids deserve this. The community obviously agrees as the parade routes the past two years have been filled with cheering spectators. Let’s show them once again how much the community appreciates them.

EDITOR’s NOTE: Remember to vote Karen Fielding for City Council, she has been doing these things for the community for over a dozen years before she ever thought of running for council. Imagine what she’ll do for this community as a council member. Check out her campaign page: https://www.karen4mesquite.com/?fbclid=IwAR0LF6MDy4Olixws7N4Qw2TQPYppJFlVsp-a8LFTglXvbWndhwsb2FJ2MMA