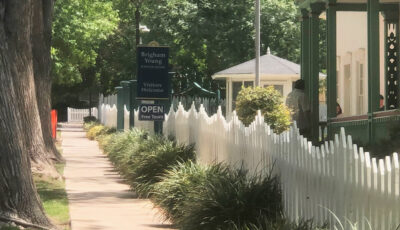 ST. GEORGE — Police are seeking information to help identify the suspect caught on video throwing rocks through a number of windows at the historic Brigham Young Winter Home.

The St. George Police Department is seeking help from the public to identify the individual responsible for causing significant damage to the Brigham Young Winter Home, according to a statement posted on the department’s social media site.

The incident took place at 1:45 a.m. on March 27, when a male suspect dressed in running gear reportedly threw rocks at the house and through several windows of the historic landmark.

A video capturing the incident was turned over to the police and can be viewed at the top of this report. The video is narrated by Detective Josh Wilson and was provided courtesy of the St. George Police Department.

According to authorities, the incident caused thousands of dollars in damage. The windows have since been replaced.

Anyone with information is asked to call Wilson, who is the investigator handling the case. He can be reached at 435-627-4317. Callers are asked to refer to incident No. 22P007959.

This report is based on statements from police, emergency personnel or other responders and may not contain the full scope of findings.