An Evening With the Stars featuring the Edwards Twins, Anthony and Edward 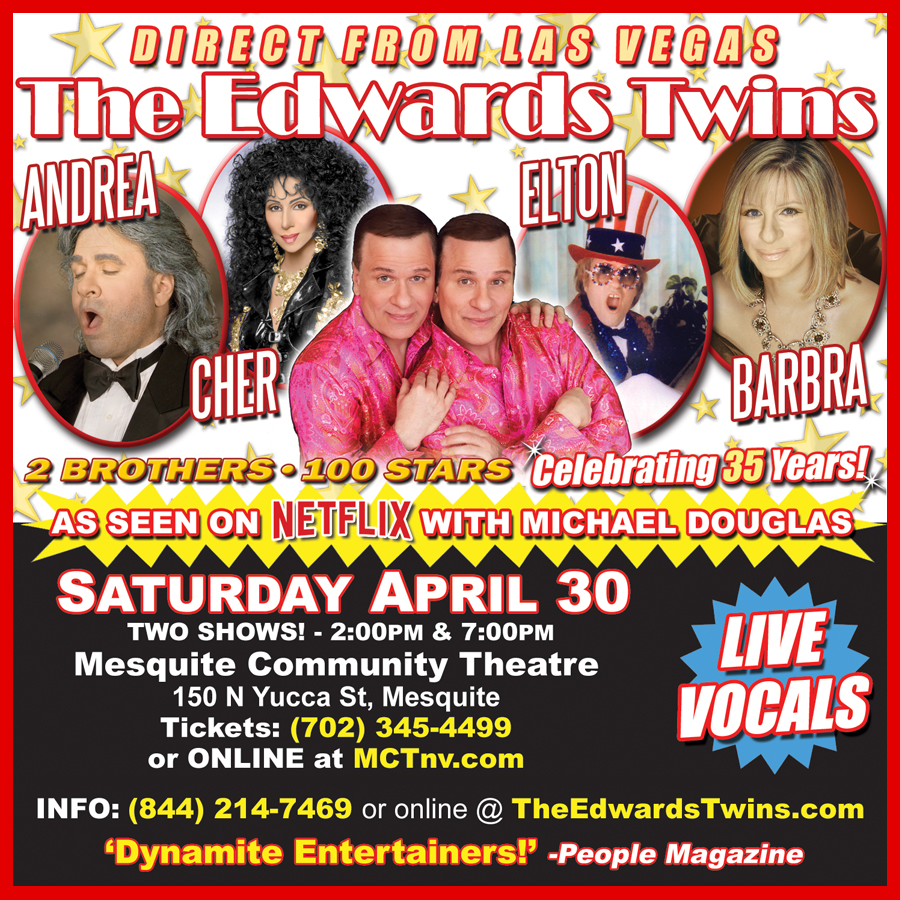 The Edwards Twins are renowned master vocal and makeup illusionists and they’re coming to Mesquite.

Brothers Anthony and Eddie are a variety show all on their own having perfected the illusionary performance of over 100 stars from Rod Stewart to Lady Gaga.

They are the premier Celebrity Illusionists who utilize the latest Hollywood grade make up and prosthetics to transform their appearance. They are also quick-change artists and their costumes are the creations from the fashion designers who worked for the celebrities they impersonate.

The brothers are currently performing a US tour and they’ve graciously accepted an invitation to perform at the Mesquite Community Theatre, 150 N. Yucca St. on Saturday, April 30.

The Brothers have been seen on shows such as The Tonight Show, Entertainment Tonight, The Today Show, Ellen and currently appear in the “Kominsky Method” with Michael Douglas and Alan Arkin. The Edwards Twins perform over 250 shows per year around the country and the world. They recently performed 10 packed shows at The World Casino in Singapore and tour the state of Florida to sold out audiences from January until April annually.

The twins began their love of celebrity impressions at an early age. They lived near the Burbank Studios and would sneak in and watch various shows being taped. The twins play at home was mimicking the skits from shows like Sonny and Cher, Laugh In and the Carol Burnett Show.

Brother Eddie’s voice was higher than Anthony’s, so Eddie usually got the female parts. His first impression was Lily Tomlin’s character Ernestine the Operator.

Eddie was approached at a Halloween party and asked if he’d ever thought of impersonating Barbra Streisand. It wasn’t too long before Eddie began studying the art of makeup and learning the tricks of the trade.

He was hired by La Cage aux Follies and traveled the globe impersonating Barbra Streisand and Bette Midler.

He was asked to perform on the Vegas Strip and for five years was with the show Evening at La Cage. He performed Cher and Bette Midler at Cesar’s Palace.

Eddie was then asked to perform for five years on the Las Vegas strip in the famous show “Evening at La Cage” where he met and performed for Cher and Bette Midler at Caesars Palace. American television icon, Carol Burnett, played a major role in the Twins’ success. When Eddie was performing on the premier of her TV show, she suggested that the two brothers combine their forces and do a show together. They took her advice and Eddie joined his identical twin Anthony, and they started to perform their own star-filled spectacular “Celebrities on Stage”. In their show, Eddie performs as Barbra Streisand, Cher, and Bette Midler.

After going to California institute of the Arts to receive a degree in Music, brother Anthony moved to San Diego to receive a minor in Police Science. He graduated from The San Diego Police Academy in the early ’90s ready to go in to law enforcement, when The Lord took him back to his roots of entertaining. He joined forces with his Twin Brother Eddie, after Carol Burnett suggested to them that they put a show together based on a pair of identical twins that look and sound like many different super stars.

When the twins are on stage they move, sing and perform like the actual stars and each of their impersonations is done to perfection.

After watching a performance, a Senior Editor at PEOPLE MAGAZINE was moved to write “They bring such love and attention to recreating celebrities, that in many ways they are better than watching the real thing.”

Don’t miss this dynamic duo and all the celebrities they’re bringing to the Mesquite Community Theatre with them.

Tickets are on sale now and available at the Mesquite Fine Arts Center, or online by clicking the ad to the right of the page. Tickets are $25 and $35, don’t delay, they’ll go fast.

See you at the theatre.