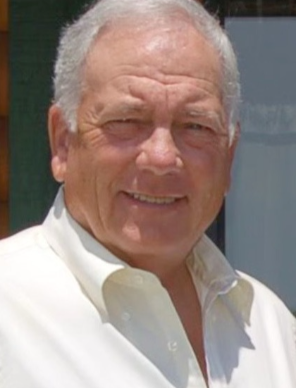 Merlyn Perry Bigelow, 81, passed away Monday, April 25, in Mesquite, Nevada. Merlyn was born in Payson, Utah, March 5, 1941, the oldest son of Perry Kendall Bigelow and Norma Gabbitas. Merlyn was raised in Provo, Utah, and lived in various places in northern Utah,   southern Nevada, Florida and Texas before settling back in Mesquite, a place he truly loved.
Merlyn joined the US Navy on March 5, 1958, his 17th birthday. He served during the Vietnam War period. He served on the USS Lexington under an admiral who was near retirement. The admiral wanted to see the world before he retired so Merlyn was able to cruise the world on this ship for a year and see many exotic places on the way. After his discharge from the Navy, he met and married Carolyn Parkinson and they became the parents of 3 children, Mark Merlyn, Curt Kendall and Barbara Lynn. Merlyn and Carolyn later divorced.
While serving as the deputy sheriff in Mesquite, he became friends with Archie Hughes, owner of the Chevron station where he fueled up his patrol car.  One day, Merlyn saw a beautiful girl crossing the street near the station.  Archie introduced her as his daughter,  and they soon fell in love. Merlyn and Tonya Ann Hughes were married December 1, 1972, and that union was later solemnized in the St. George LDS temple. Tonya had 2 children, Scott and Dana. Merlyn accepted them as his own. Two more sons, Brett Merlyn, and Blair Cody came to complete the family.  Merlyn was dedicated to Tonya and always wanted to care for her needs.  He was always attentive to her and worried about her constantly.  Being with her and making her comfortable was important to him.
Merlyn loved Elvis Presley and his music. He was able to meet Elvis when he was employed as a Deputy Sheriff in Las Vegas.  He once stopped to provide assistance to a white Cadillac with a flat tire.  It turned out to be Elvis Presley and his associates. Every year after that when Elvis was in town, Merlyn received a ticket to one of his performances.
Merlyn worked as an electrician for Nevada Power for many years, but his true passion was being in the outdoors.  His favorite hobby was fishing, but he also enjoyed hunting, trapping, camping or any other outdoor activity. He loved to collect things and had an extensive collection of sports cards, coins, steins, and glass bottles. Watching wildlife through his binoculars was a common pastime, and he loved watching hummingbirds.  He and Tonya loved making and selling a variety of crafts such as Christmas trees, stocking hangers, and decorative bird houses.  He was talented at card games such as hearts, pinochle, and poker.
Merlyn loved to tell quirky jokes, and he could keep the attention of a group for a long time with his war, hunting, and fishing stories. This talent was particularly appreciated by the residents of Highland Manor where he and Tonya have lived for the past 2 years. Staff and residents at Highland all love him.
In recent months, his health declined rapidly, but he passed away peacefully.  Now there is another fisherman in heaven.
He is survived by his beloved wife, Tonya, of Mesquite NV; children: Mark, Curt and Barbara, Dana (Brent) Wainwright of Live Oak, FL, Brett (Rachel) of Peoria, AZ, Blair (Teira) of Jourdanton, TX, daughter-in-law, Kim Webb, of Peoria, AZ; 17 grandchildren and 5 great grandchildren; Siblings, Marilyn Bigelow, James Bigelow, Joann Simper, Gregory Bigelow and Cynda Ellis.  He is preceded in death by his parents, Perry and Norma Bigelow, son Scott Webb, and  granddaughter, Lauryn Ann Webb.
A viewing will be held at Virgin Valley Mortuary, 329 East Old Mill Road Friday, April 29, 2022, from 9:30-10:30 am.  A graveside service will immediately follow at 11:00 am at the new Mesquite Cemetery, 1362 Hardy Way.
The family invites you to leave a message or memory in their Guest Book at http://www.virginvalleymortuary .com.

To send flowers to the family or plant a tree in memory of Merlyn Perry Bigelow, please visit Virgin Valley Mortuary’s floral store.