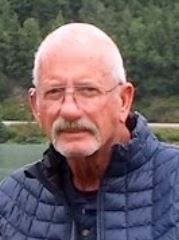 William Lee Brewer (AKA Bill), our loving and humorous husband, father, brother, uncle, and friend, passed away peacefully in Mesquite Nevada on April 22, 2022. He was born in Long Beach, California on May 19, 1943. He graduated from David Starr Jordan High School in 1961. Bill Married his high school sweetheart, Joan Peppett in 1962 shortly after joining the United States Marine Corp (USMC) in 1961. He proudly served eight years in the USMC and spent 13 months fighting in the Vietnam War as a Field Artillery Howitzer troop. He separated from the USMC under honorable conditions as a Staff Sergeant in 1969.

Bill and Joan resided in Long Beach California and adopted their son Tommy in 1973. They lived in southern California until 1983, during that time Bill worked as a Pipe Fitter where he met some lifelong friends and started getting into fishing, hunting, and training hunting dogs to hunt pheasants and quail. He liked to take his family out camping and fishing. He also enjoyed drinking beer and watching football, especially the Oakland Raiders. In 1983 they moved to Venice Utah, it was there that Bill changed professions and became a Deputy Sherriff for the Sevier County Sheriff’s Office and later Sergeant and Investigator. Bill loved working in law enforcement and living in Sevier valley, he called it a “vacation home”. He enjoyed hunting deer, elk, and waterfowl.  He also was an active committee member of Ducks Unlimited.

In 2002 Bill retired and moved to Mesquite Nevada with Joan. He started working as a groundskeeper for the Casa Blanca golf course where he and his close friend worked and golfed together almost every week. Bill enjoyed shooting trap, skeet, and sporting clays for fun and competition. Bill and Joan also enjoyed camping and spending time with their grandchildren. Bill was always there for his family and friends to help and support any way possible. His love and guidance have made a positive impact on those he touched. He will be missed dearly.

Bill was preceded in death by his grandparents, mother, and father. He is survived by his wife Joan Brewer, son Tom, daughter-in-law Stephanie, sisters Patty (Howard) Johnson, Laura (Skip) Nessel, and sister in-law, Joyce Parlin, grandchildren, Aidan and Aric Brewer, Cameron and Colten Hern and numerous nieces, nephews, and cousins. A celebration of Bill’s life will be held for friends and family in June 2022, with details to be announced.

To send flowers to the family or plant a tree in memory of William Lee Brewer, please visit Virgin Valley Mortuary’s floral store.