Gomes goes for the Ironman Gold 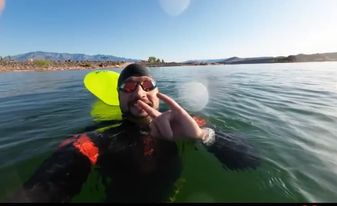 Mike Gomes, owner of All in Cycles of Mesquite is gearing up for competition in the  St. George Ironman Triathalon. Gomes is number 700 registered out of 2,500-3,600 (numbers have ranged depending on the source.) competitors. His start time is before the 7 a.m. hour on Saturday, May 7.  That is when Gomes will plunge into the icy waters of Sand Hollow Reservoir for the two-mile swim that begins the roughly 12 and a half-hour-long grueling competition. Once out of the water, Gomes will mount his bike for a 112-mile ride over the rugged desert terrain. That’s not all folks, this is a “TRI-athlon” competition, it means after the first two lengths of the journey, Gomes, along with all others, will be competing in yet a third length of the competition and third way, on foot.

This is the first full Ironman competition for Gomes. He has competed in several half Ironman triathlons. Mesquite Today has no doubt he’ll excel, it’s in his blood…sort of. He has been involved since before he was born.

Mom, Molly Gomes, has no doubt either, she was a triathlete in her college days and Mike participated in his very first triathlon when he was still in the womb. Mom didn’t know she was pregnant at the time she competed. It was her last triathlon but her journey of becoming a mom had just started and in 35 years, since Mike was born, it’s only gotten better. She is very proud of her son for pushing himself to be the best he can be in all ways. You can hear the pride in her voice when she talks about Mike’s accomplishments and about carrying on the tradition. Molly knows how tough the training is but is still amazed at what Mike has been able to juggle in preparation for tomorrow’s event and in his life overall. Mike is extremely focused on improving every aspect of his being, every day. He works on improving his physical, emotional, social and spiritual health in all that he does. It takes strong character and extreme self-discipline to pull off such a feat. This isn’t something you can decide to do on a whim. You don’t just wake up one day and for the first time decide to compete in a competition like this. It takes years of hard work and dedication to training; one must be thoroughly committed.

Gomes begins his day at 3:30 a.m. training and doesn’t stop until it’s time to shower dress and open up shop, All in Cycles, where he spends the day catering to customers’ needs. He does take time for meals; gearing up for competition requires a lot of fuel, mostly in the way of carbs. Eating or consuming the proper amount of carbs and proteins is important for energy, endurance and muscle maintenance. Gomes is a serious athlete. He carefully monitors his intake and burning of calories along with heart rate as part of his training.

While mom isn’t competing anymore, she certainly hasn’t backed away from the excitement. She and hubby Bill will be volunteering today and tomorrow to get the bikes set up for the athletes. The bikes have to be in position and ready to go when the athletes exit the chilly waters. Each athlete knows the spot their aiming for to grab their gear and go because, in the Ironman, timing is everything, and going to a spot where your gear isn’t can cost you big.

The competitors each have their own gear bags. Mike has five, one filled with the gear needed for each leg of the competition and two “Hail Mary” bags that contain much-needed, miscellaneous items such as sunscreen, water and snacks along with other items that vary depending on the needs of the particular athlete.

Gomes’ swim bag will definitely consist of a wet suit to protect him from the cold, his biking bag may contain a special pair of shoes that are great for biking, emergency first aid items and tools. His running bag will no doubt contain a different pair of shoes designed for running, possibly a change of clothing or shirt and any other items needed for the miles-long run that completes the Ironman Triathlon.

When Molly competed in her college days, she was very strong in two of the three sports. She excelled in both swimming and biking. Running was her weakest event and she said, “Ironically, it’s Mike’s weakest too but he’s put an awful lot of effort toward improving and I’ve no doubt he’s going to do well.”

Mesquite Today will be happy to let you know how Mike did after he’s completed the event. Stay tuned.