“Clear the Shelter”, cleared the shelter 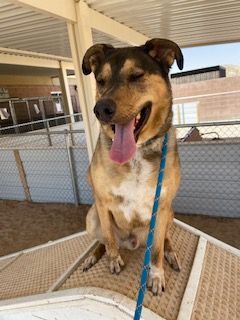 Officer Esteban Andrade was busy filling out the paperwork for Eunice Argaez to adopt a young and very sweet Pitbull named Frida. Frida was a happy girl who couldn’t wait to get to her furever home and the love she deserves.  Leah Lantow and Blanca Hernandez came with Eunice to help her pick out the perfect pet. Frida is one lucky pooch, but Frida wasn’t the only lucky furbaby to find their home. Almost everybody had been adopted. The shelter started the event because last week they had 17 dogs and several cats.

Officer Andrade said they have been blessed for the past several years. They’ve seen a fast turnover on most of the adoptable pets and have had to keep very few for any length of time. For whatever reason, in the past two months or so they’ve had an incredible amount of owner surrenders. The shelter is able to handle the number of animals that come and go, but last week they were up to 17 dogs.  While the number of animals was reduced quite a bit before the event, they were still looking forward to finding all the pets good homes and they did.  At 8 a.m. when the event opened, they had eight dogs and three cats needing homes. All but one dog was adopted by noon, Frida was the second to the last to go. The only dog remaining was Bruno.

Bruno is a shy German Shephard mix but he is sweet and attentive. He will make a great companion and good watchdog for the right family. Bruno unfortunately has not had consistent training and really needs a family who can set him up for success. He has energy to spare and would benefit from a home where he gets enough exercise and mental stimulation. He is a smart boy and learns quickly. It will be important, if you adopt this handsome boy, to give him the opportunity for lots of exercise!  He loves people and spending time with you. Bruno is a big boy and sometimes forgets just how big he is especially when he wants to cuddle and share your seat.

The shelter usually charges an adoption fee of $60. The fee includes spay/neuter, rabies and DHPPC vaccines. It is a deal compared to what one would pay out of pocket to get the vaccines alone. By adopting through the shelter and paying only $60, a person is saving hundreds in spay/neuter costs.

Mesquite Animal Shelter is a NO KILL shelter, when they fill up and the adoptions aren’t as forthcoming as they would like, events like this help immensely.

It certainly helped in this case. The event was scheduled to be held on the 27 & 28 but they don’t appear to have a need to run the event today but you never know. There are still some animals at the shelter but they’re either adopted and waiting for their vet appointments before they can go home or they’re not adoptable yet. Some are strays and they are kept on a 72-hour hold to give the owners a chance to retrieve their babies. If nobody claims the animal in 72 hours, adoption is possible.

72-hour holds are only for 3 days, someone may be available today if they were on hold yesterday and nobody picked them up. In any case, the Mesquite Animal Shelter is one of the best places a dog or cat can live temporarily but nobody wants them in a cage forever. Everybody agrees that they are better off in a furever home; maybe yours.

For more information on the Shelter’s future adoptable pets, you can always check their Petfinder site. Dogs and cats will be posted when available.  www.mesquiteanimalshelter.petfinder.com