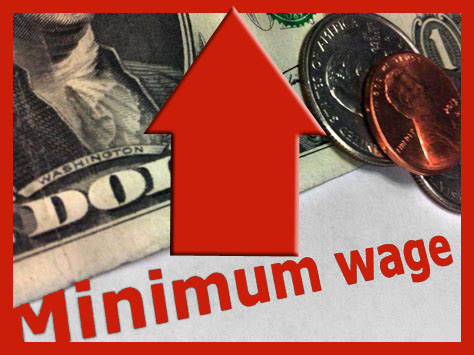 Workers and businesses in these 20 states and many others with inadequate minimum wages are depending on a federal increase.

“Every day without a raise is another day the minimum wage falls further behind the cost of living,” said Holly Sklar, CEO of Business for a Fair Minimum Wage. “When the minimum wage is set too low, workers can be making more than the minimum and still struggle to pay rent and feed themselves and their families. Minimum wage raises go right back into businesses and communities, as workers have more to spend as customers at local businesses.”

Johnny Martinez, co-owner of Georgia Beer Garden, By Weight and Measure bar, and Joystick Gamebar in Atlanta, Georgia, said, “Over the last 13 years, our country has been through so much, but we haven’t raised the minimum wage. People are falling further behind the cost of living, and that’s inexcusable. I know first-hand that treating employees well helps hiring and makes businesses stronger. Congress needs to pass a federal minimum wage increase to boost the wages of workers in Georgia and elsewhere, and strengthen our economy.”

Ashraf Hijaz, owner of Beauty & Beyond, headquartered in Montgomery, Alabama with 28 locations across Alabama, Georgia, Florida, Louisiana, Tennessee and Texas, said,  “Many of my customers are low-wage workers. I know for certain if they made more, they would spend more – at my stores and others. We can’t wait for action state by state. Alabama, Louisiana, and Tennessee don’t even have a state minimum wage and Georgia’s state minimum wage is a paltry $5.15. Raising the federal minimum wage is vital for building stronger local communities across the South.”

Adam Orman, owner of L’Oca d’Oro Restaurant in Austin, Texas, said, “As a restaurant owner, I know the value of paying a fair wage. When employees are paid fairly, they are happier, take better care of your customers, and they can afford to live in the cities where they work. Raising the minimum wage to $15 is essential for a more resilient restaurant industry and thriving independent local restaurants in Texas and elsewhere.”

Rebecca Hamilton, co-owner of W.S. Badger Company in Gilsum, New Hampshire, said, “Badger’s success is directly tied to the dedicated work of our staff. We have thrived because we’ve invested in fair compensation that attracts people to come work with us and enables them to stay with us long-term. New Hampshire’s minimum wage of $7.25 is way too low for anyone to live on, and it’s bad for business. Given the cost of living, the minimum wage should be at least $15 and higher.”

Mike Draper, owner of Raygun clothing and design, with locations in Des Moines, Cedar Rapids, Cedar Falls and Iowa City; Kansas City, Missouri; Chicago, Illinois; and Omaha, Nebraska, said, “In the 13 years since the last federal minimum wage increase, we have grown from a one-person operation to a company with over 100 employees in seven locations, and we have raised our starting wage multiple times. I’ve also gotten married, had four children, and seen four presidents – a lot has happened in 13 years while the minimum wage has been sadly stuck at $7.25. Paying a living wage has helped us hire and retain great staff, as well as grow during the pandemic. It’s long past time to give America a raise!”

Camille Moran, owner of 4 Seasons Christmas Tree and Plant Farm in Natchitoches, Louisiana, said, “The minimum wage has been unlivable for a long time. Each year we go without an increase, it gets even worse. No matter where you live, whether it’s rural Louisiana or a city, $7.25 is too low to live on. Raising the minimum wage is just what Louisiana needs.”

John Schall, owner of El Jefe’s Taqueria with locations in Massachusetts, New Jersey and Pennsylvania, said, “Since the pandemic hit, we’ve opened six new shops, including our eighth restaurant, which opened in July in Pittsburgh. Fair pay is at the heart of our success. We’ve been able to hire and retain good employees, which saves us money on turnover and training. Raising the minimum wage will help other businesses experience these benefits and put more money in people’s pockets to increase consumer spending.”

Steven Dyme, CEO of Flowers for Dreams, with locations in Chicago, Detroit, Minneapolis and Milwaukee, said, “Increasing our starting wage to $15 in 2020, and growing it each year, has been one of the most important business decisions we ever made. We’ve become a magnet for the best florists, and it’s enabled our successful launch in a fourth state this year. It’s time for Congress to level the playing field for workers and business owners alike by resetting the floor across the economy to a livable wage.”

Eleven states and D.C. have enacted a minimum wage of $15 or higher through legislation and ballot initiatives (and are at various stages of phasing in scheduled increases and annual cost of living adjustments): D.C., California, Connecticut, Delaware, Florida, Hawaii, Illinois, Maryland, Massachusetts, New Jersey, New York and Rhode Island. Virginia also passed a gradual increase to $15, but the General Assembly must re-enact the final steps before they can occur. On July 7, Raise the Wage Nebraska submitted signatures to the Secretary of State for a 2022 ballot initiative that would gradually raise the state minimum wage to $15 by 2026.

Action in the states is essential, wherever it is possible. But it’s also essential that Congress increase the buying power of the federal minimum wage for the benefit of workers and businesses. More than 1,000 businesses and business organizations – and counting – have signed the Business for a Fair Minimum Wage statement calling on Congress to raise the federal minimum wage to $15 an hour by 2025.

Business for a Fair Minimum Wage is a national network of business owners and executives and business organizations that believe a fair minimum wage makes good business sense. www.businessforafairminimumwage.org.