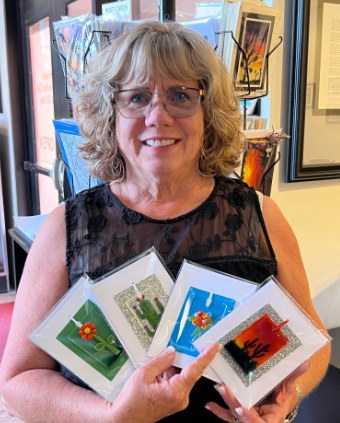 Growing up in Colorado, art has always been a part of Pam’s life. In school, through college, and into adulthood she took a multitude of classes, seemingly trying every art medium. Thirty years ago she and her husband bought a house that had the perfect place for stained glass windows. She decided that instead of paying someone to make the windows she would take a class to learn to make them herself, thus introducing herself to glass. She then moved into fused glass and was so taken that she immediately had to buy a kiln of her own and she has been fusing glass ever since.

Even though art was Pam’s love, her profession was teaching, for thirty-one years she taught nearly every grade level, special education, and even had a job as a mentor for teachers.  It was the perfect job while raising two sons, and it also allowed for time to be creative. In addition to glass, creativity for Pam also included painting, knitting, crocheting, card-making and general crafting.

In 2014, Pam retired from teaching and she moved to Mesquite with her husband, Alan, in 2016. One of the qualities that she loved about Mesquite was that it seemed to be a very “artsy” town.

Once here Pam jumped right into an assortment of activities through Sun City where she is currently the president of Glass Crafters (Fused Glass Club).  She has also been a member of the Virgin Valley Artists’ Association since 2016, and she is currently the chair of the Boutique Committee, as well a member of the Board of Directors. Being part of VVAA has given Pam an opportunity to connect with other artistic-minded people as she enjoys this phase of her life in Mesquite, Nevada.